Although fears of a recession are growing, Fort Worth economic watchers project that the city and Texas will be largely protected from the worst of its effects.

Recession fears are fueled by rising oil prices, inflation reaching its highest level in 40 years, and recent interest rate increases in response by the Federal Reserve Board.

Roger E. Meiners, professor of economics at the University of Texas at Arlington, said Fort Worth and North Texas would likely not be hit as hard as some areas if there is an economic slowdown or a recession.

“Our population continues to grow, so the demand for real estate will keep up – people have to live somewhere,” Meiners said.

He expects housing prices to fall a bit because of rising mortgage rates, but not as much as in high-end markets, such as California or New York.

“Businesses continue to move to Texas from the high-tax, high-regulation states, so more employment opportunities will occur compared to other areas,” he said.

In May, the prices of gas, food and most other goods and services surged 8.6%, the highest inflation figure since 1981, according to the Bureau of Labor Statistics. That statistic contributed to a spate of recession talk, although Texas economist Ray Perryman said comparing the current situation to the 1980s was off the mark. He said the causes of inflation currently are the result of several factors, such as supply chain issues and the invasion of Ukraine.

“They do not reflect the institutional forces that created systematic, long-term inflation that plagued the 1970s and early 1980s,” Perryman said in a research note on his website.

For fuel logistics company Ricochet Fuel Distributors Inc., of Hurst, the increases in the costs of fuel have impacted the cash flow of business, said founder and president Kelly Brett Roberts. 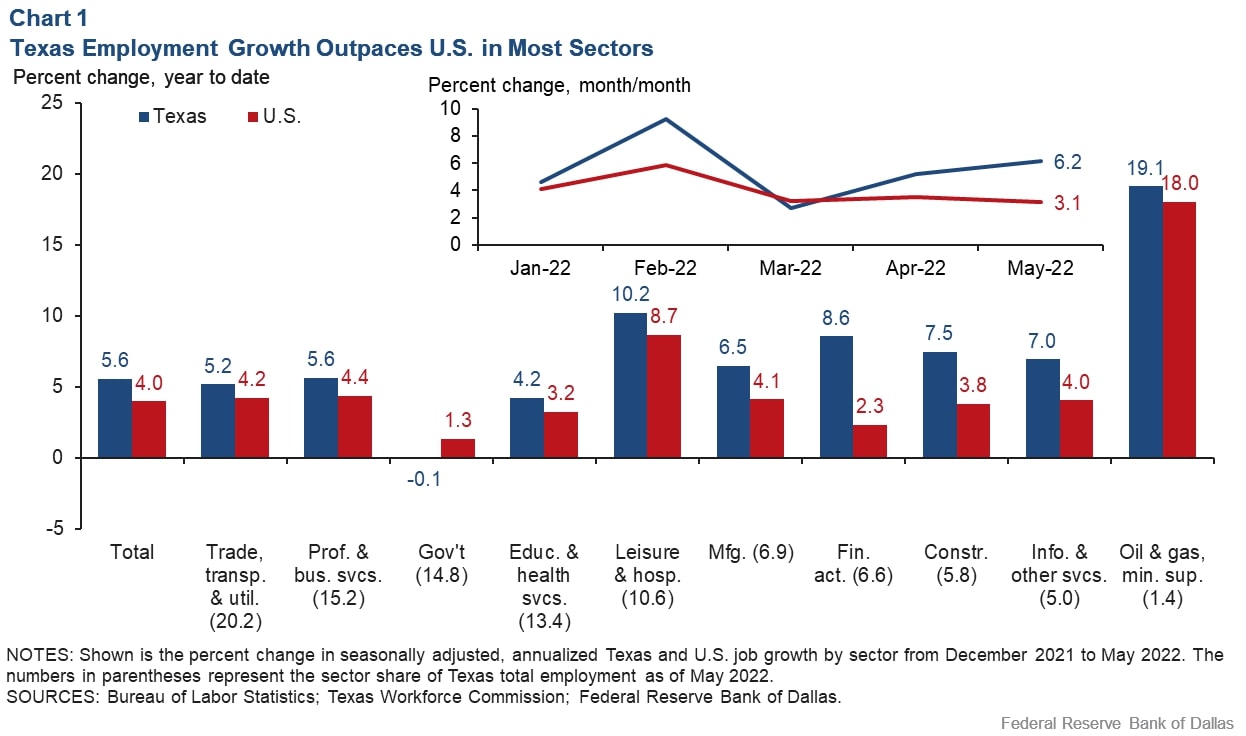 Inflation is having a severe impact on businesses, along with individuals, according to a recent survey from The Harris Poll commissioned by Express Employment Professionals. If wages continue to increase, 47% of employers say their company won’t be able to make it, according to the survey. To adapt to high prices, 40% of companies raised prices in response, according to the poll.

While many businesses are passing their increased costs along to customers, Texas Restaurant Association president and CEO Emily Williams Knight said the restaurant industry learned from the pandemic how to be creative during a crisis.

“This creativity is illustrated by the streamlining of menus, using every part of an ingredient, reducing hours, and expanding the use of technology — all in an effort to do more with less,” she said.

As a result, she said, Texas restaurants have raised their prices only about 7%, compared with grocery stores, which have increased prices around 12%.

Members of the restaurant association are reporting a slowdown in business, particularly for in-house dining during the past two weeks, Knight said.

“We believe much of that is connected to rising inflation and rising gas prices for families,” she said.

As a result, customers are beginning to shift to more quick service or fast-food restaurants.

“Consumers are certainly seeking value as they did maybe early on in the pandemic,” she said.

Texas employment this year expanded an annualized 6.2 percent in May, greater than April’s 5.2 percent increase and above the U.S. rate of 3.1 percent, according to the latest report from the Federal Reserve Bank of Dallas. Job growth was particularly strong in oil and gas, education and health services sectors, according to Laila Assanie, a senior business economist at the Dallas Fed.

While that is strong, she said, the Fed expects Texas’ employment rate to expand 4% on an annual basis this year, meaning that job growth is expected to slow over the course of the year.

Texas real estate economist Mark G. Dotzour said that if the national economy slows or even if it dips into a recession, he expects Texas to be largely immune.

“The net domestic migration to Texas is positive,” he said. “People want to come here, and our home prices are still cheap on a relative basis, so I feel pretty confident that we will perform a lot better than the nation as a whole.

Dotzour, who spoke in Fort Worth at an event sponsored by The Baker Firm and Fidelity National Title on June 21, said the work from home trend has also worked in the state’s favor.

“I can work for Google and live in Allen, Texas,” he said. “I don’t have to be in San Jose. That will further enhance the relative growth of north Texas compared to what we’ve seen in the past.”

Fort Worth expects continued growth even if national economy slows

Winter break is coming for Fort Worth students. Here’s when it starts and ends.