Fort Worth and other Tarrant County cities are seeing a boom in sales tax revenue.

In July, Texas collected $3.9 billion in sales tax revenue – the highest ever monthly record, according to the Texas Comptroller of Public Accounts.The booming revenue is mostly fueled by oil and gas production taxes, which combined generated more $1 billion. Retail trade and restaurant sales tax revenue saw moderate growth, but some types of stores did better than others.

Next to property tax, sales taxes represent the largest source of money in the city’s Crime Control and Prevention District Fund.

The report, issued by Fort Worth city manager David Cooke, estimates the city will collect $204.5 million by the end of the fiscal year – an 11.8% increase from the 2022 budget. Cooke didn’t respond to Fort Worth Report’s request for comment.

Ray Perryman, a Waco-based economist, said the recent strength in tax collections is an indicator of the significant strength in the Texas economy. Record oil and natural gas severance collections created a surplus in the state’s rainy day fund, the Economic Stabilization Fund.

“The sales tax increase reflects increases in both consumer spending and business outlays,” Perryman wrote in an email to the Fort Worth Report. “Coupled with strong growth in jobs and other indicators, it suggests that, despite the headwinds that affect all areas of the country at present, Texas is faring quite well.”

Despite growing fears of a recession, economic experts project the city and Texas will be protected from the worst of its effects, according to past Fort Worth Report coverage. However, retail spending flattened nationwide in July as inflation reached a 40-year high, according to the Associated Press.

Texas Comptroller of Public Accounts Glenn Hagar said inflation contributed to increased levels of sales tax revenue in a revenue letter on July 14. Savings accumulated during lockdowns and spending was curtailed, but then supply and labor shortages spurred prices.

“Already increasing inflation was further exacerbated by spikes in oil and other commodity prices following the Russian invasion of Ukraine” Hagar wrote. “The result has been record high sales tax and severance tax revenues.”

Some retail sectors did better than others in July, according to the report. Receipts from auto dealers, part stores and home improvement saw double-digit growth, for example. Stores that sell home furnishing, clothing and apparel, sporting goods were flat compared to last year, according to the comptroller report.

While many businesses are seeing an increase in sales, Sue Schulz, owner of What’s Poppin Texas?, a gourmet popcorn and treat retailer in Bedford, said her sales have been down since the pandemic.

“Restaurants and other venues that were closed during the pandemic are doing well, but we’re doing the opposite,” she said.

During the pandemic, Schulz said, she was able to provide products for many people stuck at home.

“People did popcorn nights at home, so we did a lot of business,” she said. “Now, they can go out again, so we’re not seeing as much business.”

But the city of Bedford is seeing an economic bounty from the increased sales tax, she said.

“I’m on the Street Improvement Economic Development (Corporation) for the city, and we’re seeing a big uptick in sales tax collections, which were down during the pandemic,” she said.

Bedford has seen many new restaurants open recently, and people are getting out after being stuck inside during the pandemic, Schulz said.

“People want to get out after the pandemic, and I can’t blame them,” she said. 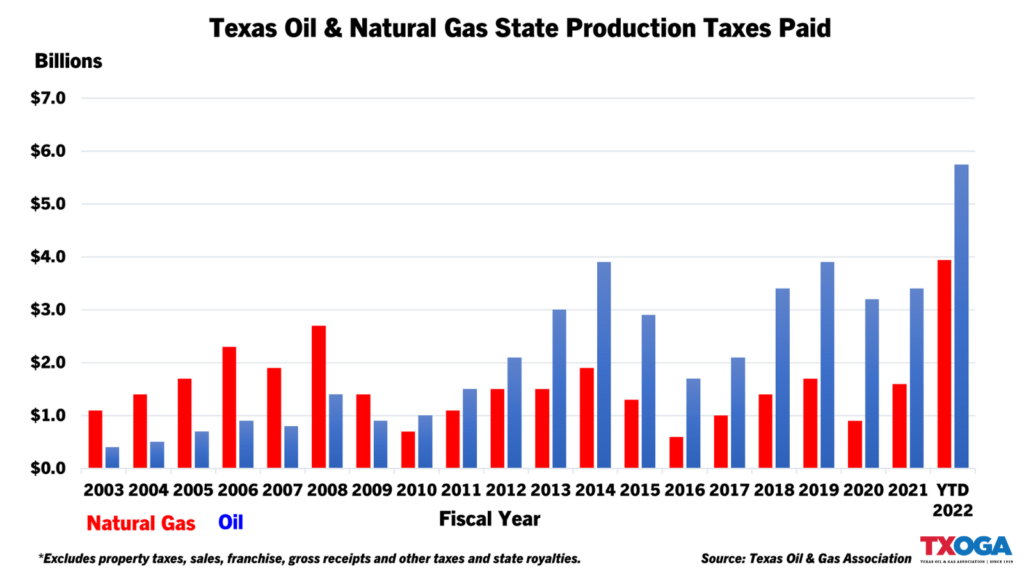 “Texas’ all-time monthly records for oil and natural gas production tax collections were shattered again in July, reminding Texans of the vast benefits our state enjoys as the top oil and natural gas producing state in the nation,” said Todd Staples, president of the Texas Oil and Gas Association (TXOGA), an oil and gas trade group, in a statement.

Production taxes are only one of the many taxes that the Texas oil and natural gas industry pays, according to TXOGA. The industry also pays billions in property taxes on all assets from producing minerals properties to pipelines to refineries and gas stations, along with other state and local sales taxes and state franchise taxes and gross receipts taxes.

The city of Grapevine saw sales tax revenue fall during the pandemic, but has since seen a strong uptick in revenues, said Greg Jordan, chief financial officer for the city.

“We’re a destination city, so a lot of our sales taxes come from hotel rooms and the terminals at DFW (Dallas Fort Worth International) Airport,” he said.

“We’ve seen those numbers come back over the past 12 months,” he said.

Bob Francis is business editor for the Fort Worth Report. Contact him at bob.francis@fortworthreport.org.

At the Fort Worth Report, news decisions are made independently of our board members and financial supporters. Read more about our editorial independence policy here.

Seth Bodine is the business reporter for the Fort Worth Report. He previously covered agriculture and rural issues in Oklahoma for the public radio station, KOSU, as a Report for America corps member.... More by Seth Bodine

‘We can only do so much’ : Low turnout at Tarrant County public election test

Click! A look back at the top photos of the week in Fort Worth, Tarrant County