Ever wanted to have a hand in shaping the future of Fort Worth? One way to do just that is by participating in city government meetings. The Fort Worth Report has created a guide to watching, attending and giving comment at these meetings, most of which are open to any member of the public.

Past and upcoming meeting dates are published on the city’s online calendar. Residents can sort by meeting category, date or keyword.

If meetings are in person, the address will be listed on the calendar. Otherwise, a video conference or streaming link will be provided. Meetings taking place at Fort Worth City Hall typically have both a remote and in-person option.

Before a meeting begins, an agenda is attached to the calendar listing. These agendas lay out general rules of conduct, what meeting members expect to discuss and who can attend. The agenda must be posted 72 hours before the start of the meeting.

Many government meetings are open to the public, but some are private. These are called ‘executive sessions,’ and are held when city officials need to discuss privileged information away from the public eye. Executive sessions can be held for several reasons, including but not limited to discussion of ongoing litigation, deliberations about real property and personnel matters.

If a large number of participants are expected to attend a particular meeting, it may be moved to a bigger location to accommodate those residents. In Fort Worth, most in-person city meetings are held at City Hall (200 Texas Street, Fort Worth, 76102).

How to watch city of Fort Worth government meetings

There are several options available for residents interested in watching a meeting. The city offers two live streams and publishes videos to a YouTube stream. The links for those streams can be found here.

The city also broadcasts meetings on the Municipal Channel. The channel number will vary depending on your provider: Charter is 190; One Source is 7; Verizon is 5; AT&T Uverse is 99.

Residents can also attend meetings and watch in-person. Be aware that you might have to pay for parking if attending a meeting at City Hall, and you will have to go through security at the entrance. If you need accommodations, be sure to notify the city 48 hours in advance. City Hall and the council chambers are wheelchair accessible; for other accommodations, like an interpreter or large print, call (817) 392-8552 or e-mail ADA@FortWorthTexas.gov.

If you weren’t able to watch a meeting live but would still like to catch up, you can watch recorded meetings through the city’s video library. The library is divided into different categories automatically and searchable by keywords, similar to the calendar. Many recordings are also available on the city’s YouTube channel.

There may be a slight delay before the recording is uploaded to the library. Meeting videos are generally time-stamped by agenda item, so you can skip to whatever item interests you.

Participating in a government meeting

The first step to participation is knowing the rules of the game. Be sure to check that the meeting you want to attend accepts resident participation — some meetings, while open to the public, do not allow for public comment. For example, public comment is not accepted at City Council work sessions.

Others are designed to gather as much public comment as possible. Zoning meetings are one such example; zoning board members are there to hear from residents about their thoughts on proposed zoning changes.

Meetings seeking public comment will have a sign-up mechanism for interested residents. On the meeting agenda, there will be a link to a ‘speaker/comment card.’ There, residents can sign up to speak or submit written comments to the board members. You will need to sign up no later than two hours before the start of the meeting. 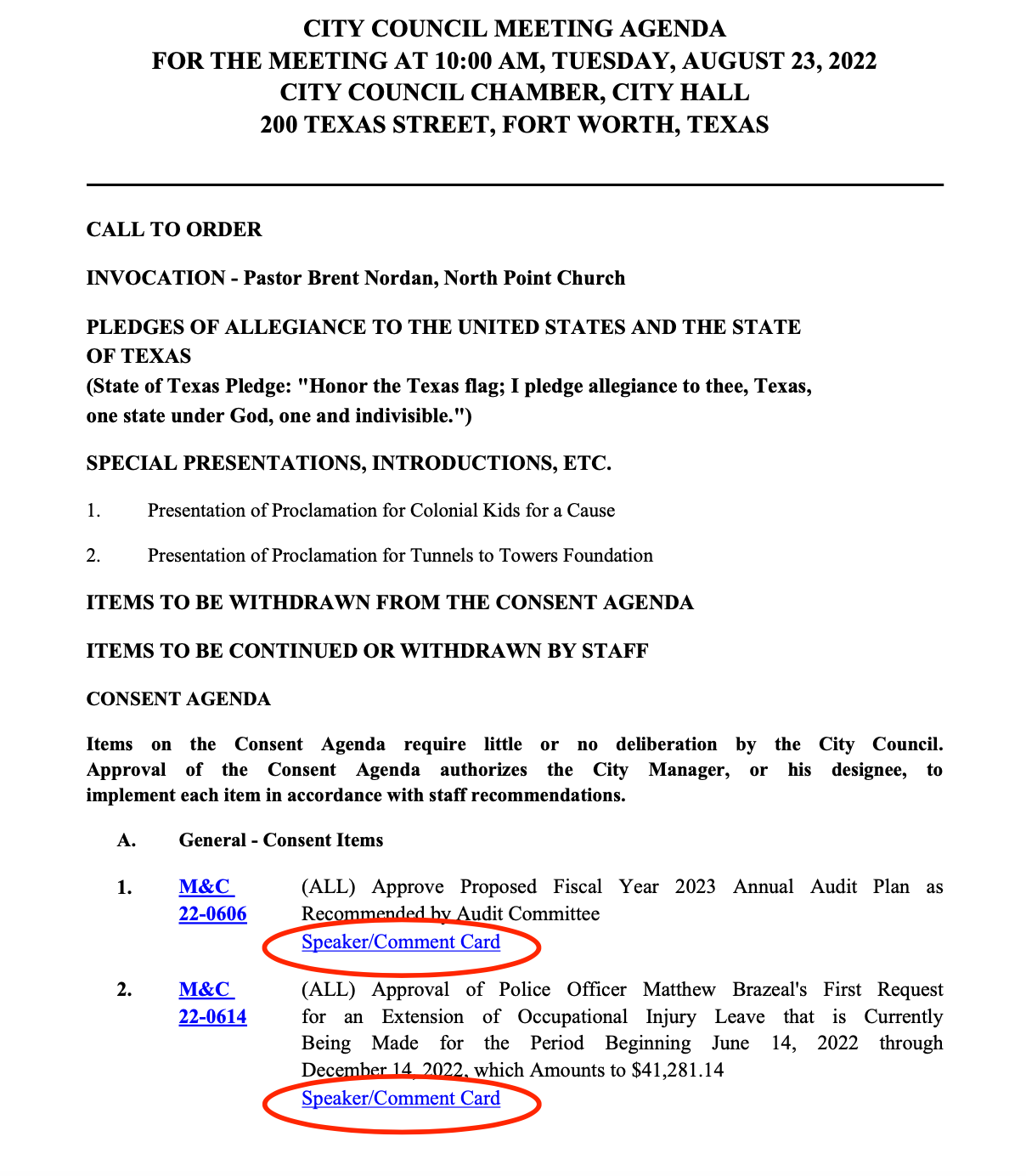 Either on the agenda or at the beginning of the meeting, city officials will lay out rules for public comment, including time limits for speakers. Time limits may be adjusted at city officials’ discretion.

When beginning testimony, residents should state their full name and city of residence or council district.

Public comment should stick to the agenda item at hand.; iIf a resident begins talking about another unrelated issue, the board may ask them to refocus or end their comment. The speaking podium will have a nearby clock counting down to indicate how much time is remaining for the public comment.
Have more questions about how to participate? Residents can contact the city secretary’s office at 817-392-6150 or email csoadmin@fortworthtexas.gov..

Republish our articles for free, online or in print, by following our guidelines.

How to participate in Fort Worth’s governing process

Emily Wolf is a local government accountability reporter for the Fort Worth Report. Originally from Round Rock, Texas, she spent several years at the University of Missouri-Columbia majoring in investigative... More by Emily Wolf