Sumter Bruton would no doubt have loved his own memorial service.

Who wouldn’t? There was some good soulful music, food, a few beverages, dancing, plenty of smiles and a good time. And memories. Lots and lots of memories. After all, Sumter had kept the Texas blues, swing, country and jazz tradition alive and flourishing for years by both playing the music on stage and selling it at his family’s record store, Record Town.

There were a few tears, too. Those couldn’t be helped. Now that Thomas Sumter Bruton III, 77, better known as Sumter Bruton or likely just Sumter, was gone, those smooth resonant bluesy-jazz solos were missing, too.

In Sumter’s hands, a guitar could swing, sing, laugh, smile, cry, wail and – more often than you’d have thought possible – take your breath away. Those solos would often be followed by loud applause and that big, wide Sumter smile. Sumter loved music and he loved for others to love music.

As his obituary pointed out, Sumter (Oct. 31, 1944 – Sept. 30, 2022) was born in a musical family. His parents owned Record Town, a store that opened in 1957 on University Drive across from TCU, where he played baseball and earned a degree.

He took up the guitar and by 1962 had joined local bluesman Robert Ealey’s band, which became Robert Ealey and the Five Careless Lovers in 1962. They played often at the New Bluebird Nightclub on Horne Street, where Sumter honed his guitar skills and word of his prowess spread. 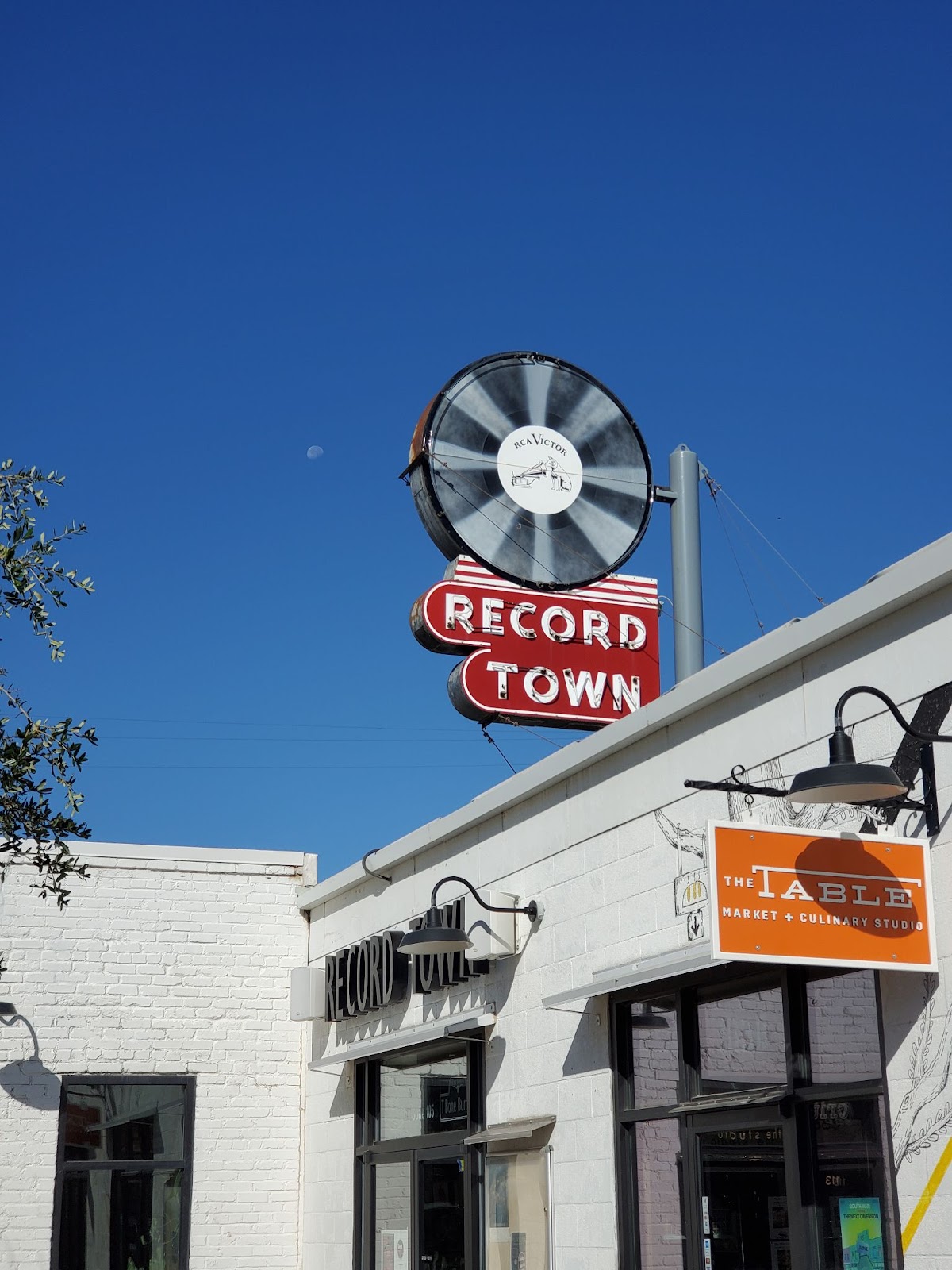 Record Town on St. Louis Avenue in Fort Worth with its iconic neon sign. (Photo by Robert Francis/Fort Worth Report)

That’s probably when I first heard him. I already knew of Record Town, having ridden there on my Stingray bicycle to find some music I had heard on the radio. Sumter’s father, Sumter Bruton Jr., was a jazz drummer, musicologist and raconteur of the highest order, the latter two traits he passed to his oldest son.

But I and thousands of other Fort Worth young adults like me really got indoctrinated into the joys of Texas music by hearing and dancing to The Juke Jumpers, formed by Sumter and Jim Colegrove in 1977. The band recorded five albums and toured the country and Europe, earning rave reviews.

Whether it was Colegrove’s swampy grooves, Johnny Reno’s blistering sax solos (often taken while “walking the bar” at whatever venue they were playing), or Sumter taking his tasty guitar solos onto the dancefloor like his Texas guitar idol, T-Bone Walker, the band had star power, charisma and chops to spare.

When Stevie Ray Vaughn  – who Sumter knew – made Texas blues hot and hip in the ’80s, the Juke Jumpers rode the wave and kept the boogie going for several years doing over 200 gigs a year for a time.

The band broke up a few times, but came back together several times over the years with the core nucleus of Sumter and Colegrove.

Sumter played on many other albums, including Slim Richey’s Jazz Grass, a seminal album from 1977 that is considered one of the first – and most successful – records to mix jazz with bluegrass. Richey lived in Fort Worth at the time and had a music store. Richey had joined the long parade of Texas musicians who moved to Austin, so when he returned to Fort Worth several years ago, I did a story about him and the album. I called Sumter to ask him about playing on the record. I still remember his quote: “It blew people’s minds when it came out in 1977. It still does.”

When Sumter’s father died in 1988, he helped manage Record Town, along with his mother Kathleen. I, like many other music enthusiasts, could enter the store to find a stack of albums he had set aside just for you, as he grew to know your tastes in music.

Among those who had the same experience as I did was Bill Mecke, one of the current co-owners of Record Town, which has now moved to St. Louis Avenue.

“We called him ‘Sumterpedia’ because you could ask him who played on just about any record and he could tell you even if you just played the record for him,” Mecke said. “And then you’d get a story about the guy and the type of guitar he played.”

I once thought that my aunt, Lou Ann Francis, was out of her head once, telling me that the great east coast jazz pianist Hampton Hawes played at a few parties she was at in Fort Worth.

I mentioned this to Sumter, and he confirmed my aunt’s story. Hawes was incarcerated in a federal prison in Fort Worth for a drug change in the late ’50s and early ’60s. He was such a model prisoner and such a massive talent that he was often allowed out to play at different parties, Sumter said. He not only confirmed my aunt’s story, he added that  Hawes often stopped by Record Town to check out the jazz selection on the way to his Fort Worth gigs. My aunt was a little hipper than I thought.

Sometimes, Sumter’s brother, the equally musical Stephen, would be in the store and the two would trade stories and sometimes guitar licks with each other. You never knew what you’d find when you stopped in on Sumter and Record Town. You’d likely walk out with a record or two.

Stephen Bruton, who died in 2009, was a singer and guitar player who played with Kris Kristofferson and Bob Dylan, among many others. He also wrote my favorite birthday song, “Trip Around the Sun.”

Bruton had been in failing health and sold Record Town and its iconic neon sign several years ago to fans and friends of the store.

“We just knew Record Town had to have it,” he said.

Bruton died on Sept. 30 and on Oct. 8, a memorial celebration was held at Ridglea Theater Lounge. Musicians who had crossed paths and learned from the generous Bruton shared their knowledge on guitar, sax, keyboard, drums or with a few vocals. On stage was Bruton’s beloved Gibson draped in flowers.

It was a room full of people who had been friends with, entertained by and influenced by Sumter. And here we were, boogieing our asses off to the Texas blues and jazz we all loved or learned to love with him.

As we laughed, smiled, drank, told stories and danced at the Ridglea Theater Lounge, just about a mile from where he started his musical journey with Robert Ealey at the Bluebird Lounge many years earlier, I can’t imagine he wasn’t looking down on all of us with that big Sumter grin and tapping his toes as we boogied to the groove he started so many years ago.

Republish our articles for free, online or in print, by following our guidelines.

Robert Francis is a Fort Worth native and journalist who has extensive experience covering business and technology locally, nationally and internationally. He is also a former president of the local Society... More by Bob Francis

Made in Tarrant: Fort Worth artist provides a ‘little burst of happiness’ through murals

Guest column: Listening helps us generate goodwill, possible solutions, but then what?