A 10-year extension to the special tax designation that helped jumpstart development on the Near Southside, known as a tax increment financing district, is set to go before the Fort Worth City Council on Nov. 8.

The proposal seeks to extend the term of the Southside TIF, which covers the Medical District, Near Southside and part of the Historic Southside neighborhood.  The plan  will reduce the city’s contribution to the  Southside TIF fund by at least two-thirds starting in 2023, and will  transition to a fixed contribution schedule, with a contingency for any unanticipated downturns.

Mike Brennan, president of the nonprofit Near Southside Inc., the organization that helps foster development in the area and administers the TIF, said the extension and the changes to the city’s contribution would allow the organization to continue working with the city on development efforts and to fund infrastructure improvements.

Reducing the city’s allocation to the TIF will allow the city to fund property tax reductions and “potentially apply some funding towards the economic development fund,” said Robert Sturns, economic development director for the city of Fort Worth, during a council meeting outlining the TIF extension plan.

In February of this year, the city council approved a plan that would dedicate money from expiring Tax Increment Financing Districts, for economic development.

One of the priorities for tapping into the TIF funds was to create “deal closing money” to financially lure businesses to the city, Sturns, the economic development director for the city of Fort Worth, told the council in the January presentation.

Elizabeth Beck, who represents District 9 covering the Near Southside neighborhood on the Fort Worth City Council,  said the proposed plan for the extension of the Southside TIF district is a “great compromise.”

“It still puts a significant chunk of money back into the general fund and/or this economic development fund,” she said. “But it also carves out enough for Near Southside to complete some of the projects that we’ve got going on down there.”

The total taxable value of this area was calculated in 1997 at $231 million and has grown to $1.2 billion, according to a city report on tax increment financing districts.

Tax financing districts, like the one in the Southside, are a way for the city to finance larger infrastructure projects without having to dip into the city budget. As tax financing districts attract investment and new development, the total taxable value of the area increases.  The tax increment –the funds that make up the difference between the new taxable value and the original base value –are then set aside to help finance public improvements within the district.

Fort Worth has 11 active tax increment districts in total.

According to the latest annual report on the performance of TIF districts, the annual growth of Fort Worth’s TIF districts showed taxable property values increasing by 22.6% in fiscal year 2021. The report also notes approximately $1.8 billion of Fort Worth’s current tax base has been created through strategic investments in TIFs.

The Southside TIF was created in 1997 to promote the revitalization of Fort Worth’s Near Southside neighborhood,medical district and part of the Historic Southside to help transform the formerly blighted area into an economically productive mixed-use district.

The Near Southside district has seen a variety of development and redevelopment since the tax district was formed. Most recently the area has seen the re-opening of the updated Paris Coffee Shop and a groundbreaking for TCU’s Burnett School of Medicine. In October,  The 701 opened, a project at the corner of Hemphill and Magnolia Avenue. It combines new development with a historic building. The site includes the new corporate headquarters for VLK Architects and a new restaurant, Walloon’s, from local Chef Marcus Pasley.

Beck said she did not expect any opposition to the plan.

“I think it’s really important to support the things that we get right as a city and we have gotten the Near South Side right,” she said. “I’d like to continue that.” 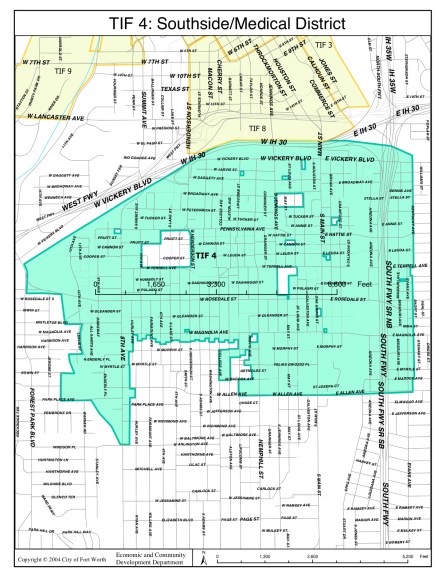 The Near Southside is a 1,278-acre neighborhood area of residences and businesses that extend to Interstate 30 to the north, Allen Avenue to the south, Evans Avenue to the east and Forest Park Boulevard to the west. It includes the South Main and Magnolia Avenue urban villages, the northern section of the Fairmount neighborhood and the Evans and Rosedale urban villages east of Interstate 35W.

Near Southside tax incentive extension up for council vote

A study finds barriers to starting a business in Fort Worth. Leaders are searching for solutions